Through years of testing, experience and maintaining the strictest quality control, HRC High Performance Products have helped both designers and contractors modernized the system of reinforcing concrete structures. Their wide range of applications in reinforced concrete have made construction easier, faster and stronger.

To date, HRC has produced millions of t-headed bars and mechanical couplers in various structures ranging from both private and federal buildings to complicated, highly-stressed bridges, offshore platforms and nuclear related facilities.

T-Heads and Couplers in Bridges

The San Francisco-Oakland Bay Bridge carries about 280,000 vehicles a day. It is being retrofitted to meet life line service standards which means the bridge should be available for use by emergency response vehicles after a major earthquake.

The Richmond-San Rafael Bridge is part of Interstate 580 spanning between the City of Richmond and the City of San Rafael. It will be seismically retrofitted to withstand a Maximum Credible Earthquake (MCE) with no catastrophic loss of life

Built in 1967, the San Mateo-Hayward Bridge carries 77,000 vehicles a day. With total length of 7.1 miles, it will withstand a Maximum Credible Earthquake (MCE) with no catastrophic loss of life once seismic retrofits are implemented.

Located 30 miles north east of San Francisco, the Benicia-Martinez Bridge will link the City of Benicia in Solano County and the City of Martinez in Contra Costa County. 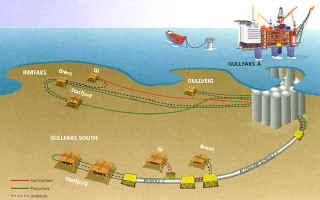 Depth to top of reservoirs ranges between 2,500 – 3,000 metres below sea level. Gullfaks A will be modified to increase its capacity for gas treatment and re-injection. Two new modules are being installed, one module measuring 39 x 12 x 15 metres for gas treatment and the other measuring 16 x 10 x 12m for pipeline pigging. The total weight to be handled is about 6 500 tons. 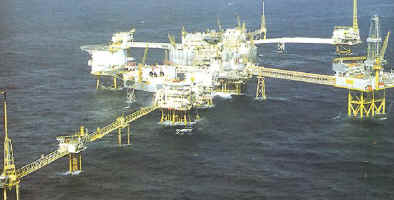 Ekofisk 2/4 J consists of an 11,400t, eight-leg steel jacket held in place by sixteen piles totaling 5,500t. The jacket supports a 23 500t topside sub-structure with module support frame, process module, separation (transport) module and utility module. It stands in a water depth of 76.1m although it is rated for 90.1m to obviate potential subsidence problems in the chalk reservoir. 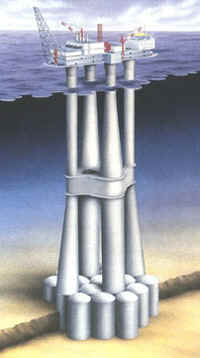 Tallest concrete platform in the world, standing in 305 m of water. Utilizing the skirt piling technique, penetrating 36m into the soft soil. 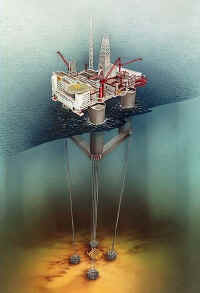 The Hibernia’s novel 450,000t gravity base structure design consists of a 105.5m concrete caisson, constructed using high-strength concrete reinforced with steel rods and pre-stressed tendons. The caisson is surrounded by an ice wall, which consists of 16 concrete teeth. Slip-forming, a continuous process of placing rebar and pouring concrete, was utilized during construction of the GBS. 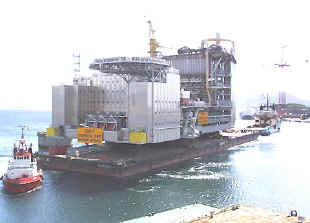 The field is located 115 km from shore and 13km from the Oseberg field, in a water depth of 109m supported by a 124m high lattice-type steel jacket substructure.The platform deck has been built as an integrated structure as far as offshore lifting capacity allows.

T-Heads and Couplers in Ports 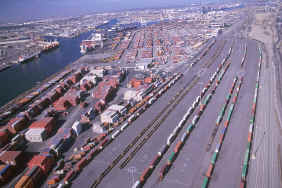 A BIRD’S EYE VIEW – The Port of Los Angeles (Pier 400) is one of the largest and most diversified seaports in the world. Comprising 7500 acres and 35 miles of waterfront, the Port is America’s busiest container port and the leading cruise port on the U.S. West Coast. 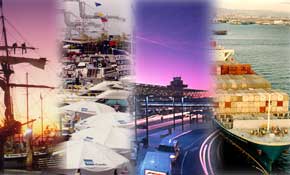 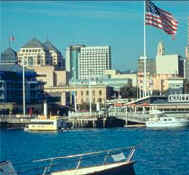 Since 1962, the Port of Oakland has spent more than $700 million to construct 680 acres of marine terminals and support area, and to install the equipment needed to handle containerized cargoes. An additional $700 million in maritime projects are now under planning and construction, including new marine terminals, improvements to the inter-modal rail infrastructure, dredging channels and berths from -42′ to -50′, environmental mitigation, a wildlife habitat, and improved public access.